Policing the Waterfront: Networks, Partnerships and the Governance of Port Security 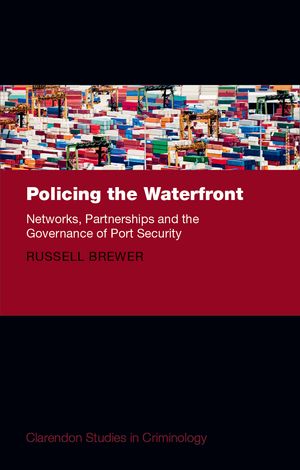 Long recognised as a site where criminal elements have flourished, for centuries the waterfront has been exploited by opportunistic individuals for a whole raft of illicit purposes. History has shown that the policing of this area poses a formidable challenge, one that continues to this day, as law enforcement seeks to alleviate concerns over organised crime, smuggling, trafficking, pillage, and terrorism.

Policing the Waterfront: Networks, Partnerships and the Governance of Port Security is the first book of its kind to fully explore the intricacies of how crime is controlled on the waterfront, as well as our understanding of the policing 'partnerships' that exist between state and non-state actors. Charting the complex configuration of waterfront 'security networks' using a range of analytical techniques, this book presents new empirical data, which exposes and explains the social structures that enable policing partnerships to function when faced with the unique challenges of the waterfront. Particularly striking is the use of enhanced or adjusted theoretical discussions, which may not yet have been applied in a policing or security setting, to both shape and develop previous waterfront security debates, resulting in a work that is both innovative and, yet, still routed in the traditions of empirical research. Overall analysis is achieved through a comparative research design, evaluating the narratives of both state and non-state security providers at the American Ports of Los Angeles and Long Beach, and the Australian Port of Melbourne; the busiest ports in each country.

Drawing on in-depth interviews undertaken with representatives from the full-array of police agencies, regulatory authorities, port authorities, terminal operators, shipping companies, and maritime unions in each jurisdiction, the author explains why the concept of social capital is important for collaborative crime control - before extending this idea, both conceptually and as a lens through which to make sense of the narratives.