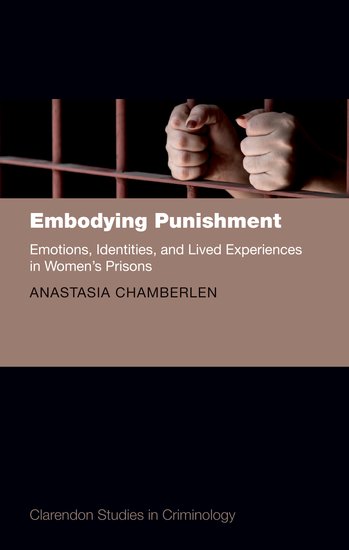 Embodying Punishment offers a theoretical and empirical exploration of women's lived experiences of imprisonment in England. It puts forward a feminist critique of the prison, arguing that prisoner bodies are central to our understanding of modern punishment, and particularly of women's survival and resistance during and after prison. Drawing on a feminist phenomenological framework informed by a serious engagement with scholars such as Maurice Merleau-Ponty, Simone de Beauvoir, Erwin Goffman, Michel Foucault, Sandra Lee Bartky and Tori Moi, Embodying Punishment revisits and expands the literature on the pains of imprisonment, and offers an interdisciplinary examination of the embodiment and identities of prisoners and former prisoners, pressing the need for a body-aware approach to criminology and penology.

The book develops this argument through a qualitative study with prisoners and former prisoners, discussing themes such as: the perception of the prison through time, space, smells and sounds; the change of prisoner bodies; the presentation of self in and after prison, including the centrality of appearance and prison dress in the management of prisoner and ex-prisoner identities; and a range of coping strategies adopted during and after imprisonment, including prison food, drug misuse, and a case study on women's self-injuring practices.

Embodying Punishment brings to the fore and critically analyses longstanding and urgent problems surrounding women's multifaceted oppression through imprisonment, including matters of discriminatory and gendered treatment as well as issues around penal harm, and argues for an experientially grounded critique of punishment.