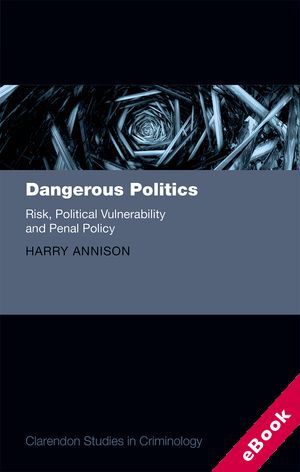 
ISBN13: 9780191044304
Published: October 2015
Publisher: Oxford University Press
Country of Publication: UK
Format: eBook (ePub)
Price: £58.33
The amount of VAT charged may change depending on your location of use.
Convert Currency

Dangerous Politics: Risk, Political Vulnerability, and Penal Policy brings together relevant literature in law, criminology, and politics to provide insights into the nature of British penal politics, the role of the judiciary and pressure groups, and the interrelation between risk, the 'public voice', and penal politics. It presents a detailed case study of the IPP story: the creation and eventual demise of the Imprisonment for Public Protection (IPP) sentence.

Drawing on over 60 in-depth interviews with key policymakers, the author investigates the beliefs, traditions, and political processes that propelled developments in the 'IPP story', namely the creation, contestation, amendment, and demise of the IPP sentence. An indeterminate sentence modelled upon the existing life sentence but targeted far more broadly, the IPP sentence has been described as 'one of the least carefully planned and implemented pieces of legislation in the history of British sentencing' (Jacobson and Hough, 2010) and has dramatically increased the indeterminate-sentenced prison population, from approximately 3,000 in 1992 to over 13,000 in 2014. Though abolished in 2012, it remains a pressing issue: over 5,000 IPP prisoners remain, with ongoing campaigns pressing for their release. Standing as one of the most striking examples of the expansion of preventive goals in sentencing policy, this study of the IPP story stands as a cautionary tale, with important lessons for Australia, Canada, the United States, and other nations that continue to pursue preventive goals.

This book argues that the IPP story demonstrates the need to be cautious of equating substance with process - while on one view the IPP sentence constitutes a penal manifestation of the risk society, its development refutes the 'evolutionary growth' of such policies as implied by the 'new penology' thesis. Dangerous Politics makes an original contribution to our understanding of the genesis and demise of the IPP sentence, and to our broader understanding of the nature of penality in early 21st century Britain. It will be of interest to academics and students in the fields of criminology, criminal law, politics and policymaking, as well as sentencing and criminal justice policymakers.