Reinventing Punishment: A Comparative History of Criminology and Penology in the 19th and 20th Century (eBook) 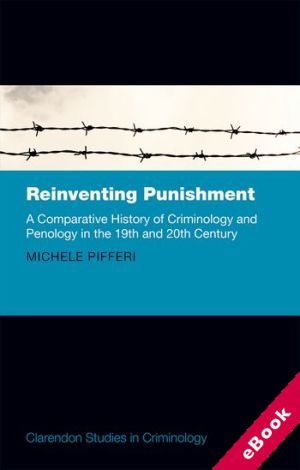 
ISBN13: 9780191060977
Published: June 2016
Publisher: Oxford University Press
Country of Publication: UK
Format: eBook (ePub)
Price: £58.33
The amount of VAT charged may change depending on your location of use.
Convert Currency

Providing a historical analysis of the impact of criminology on the rationale of punishment and the sentencing systems in Europe and the US between the 1870s and the 1930s, Reinventing Punishment: A Comparative History of Criminology and Penology in the 19th and 20th Century investigates and contrasts the rise of the principles of individualisation of punishment, social defence, preventive justice, and indeterminate sentencing.

The manner in which American and European jurisprudence enforced these ideas resulted in the emergence of two different penological identities: the American penal reform movement led to the adoption of the indeterminate sentence system, whereas the European criminological approach resulted in the formulation of the dual track system with punishment and measures of security. This theoretical divide, discussed at many international congresses and in studies of comparative criminal law, not only reflects two different ideas on the legitimacy and purpose of punishment, but also corresponds to two different constitutional views of criminal law.

The book considers the relation between constitutional frameworks (rule of law and Rechtsstaat) and penological claims, explaining how some of the tenets of penal liberalism (such as principle of legality and separation of powers) were affected by penal modernism, even with the rise of authoritarian regimes. It examines the dilemmas provoked by criminology focusing on the role of the judge in the execution of sentences, the distribution of sentencing powers among judicial and administrative bodies, the balance between social security and individual guarantees, and the inconsistencies of preventive detention. Filling a notable gap in Anglo-American literature by providing a sophisticated panoramic analysis of the development of criminology in late nineteenth and first half of the twentieth century Europe, Reinventing Punishment will be of interest to scholars of criminology, criminal law, and criminal justice studies, as well as legal historians and theorists.

Contents:
1: Introduction
2: Designing the 'New Horizons' of Punishment
3: The Origins of Different Penological Identities
4: The Struggle over the Indeterminacy of Punishment in the USE (1870s-1900s)
5: The Concept of Indeterminate Sentence in the European Criminal Law Doctrine
6: The Formation of the European Dual-Track System
7: The 'New Penology' as a Constitutional Matter: The Crisis of Legality in the Rule of Law and the Rechtsstaat (1900s-1930s)
8: Nulla poena sine lege and the Sentencing Discretion
9: From Repression to Prevention: The Uncertain Borders between Jurisdiction and Administration
10: The Constitutional Conundrum of the Limits to Preventive Detention
11: Conclusions