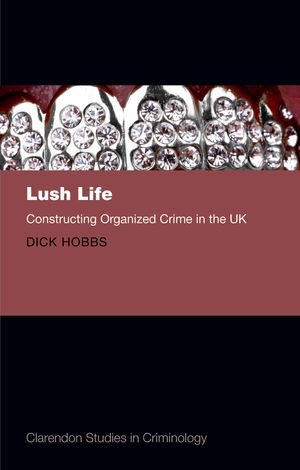 Lush Life: Constructing Organized Crime in the UK opens 'the box marked do not open, too difficult to deal with', in the words of one Assistant Chief Constable, to explore the contested notion of British organized crime. The first book to trace the history and policing of British organized crime, it addresses how the interlocking processes of de-industrialisation, globalisation and neo-liberalism have normalised activity that was previously the exclusive domain of professional criminals. With both historical and sociological analyses, informed by the author's long term connection to an ethnographic site called 'Dogtown', a composite of several overlapping neighbourhoods in East London, this book critically addresses cliches such as criminal underworlds and the notion of the criminal firm.

It considers the precursors to British organized crime, as well as the careers of famous crime families such as the Krays and the Richardsons, alongside the emergence of specialised law enforcement institutions to deal with this newly discovered threat. It also focuses on the various ways in which violence functions within organised crime, the role of rumour in formulating order within crime networks, the social construction of organised crime, the development of the cosmopolitan criminal and the all-inclusive nature of the contemporary criminal community of practice. Permeating throughout is a discussion of the flexible nature of the criminal market, the constructed nature of the notion of organised crime, and the normalisation of criminality. Underpinned by rich, context-specific examples, case studies, stories, and other qualitative evidence based on ethnographic research and interviews, Lush Life follows on from the author's work on normal crime (Doing the Business), and professional crime (Bad Business).

Contents:
1. Introduction: Dubious Ideologues and Illegal Entrepreneurs
2. A Malady of Modernity: Constructing Organised Crime in the UK
3. Malignant Cosmopolitanism: Precursors of Organised Crime
4. Mutant Proletarians: Class and Territoriality
5. The Houses In-Between: The Neighbourhood Firm on a Shifting Terrain
6. Small Faces: Entrepreneurial Youth and the State of Dogtown
7. Populating the Underworld: Armed Robbery
8. The Same Money?: Locating the Entrepreneurial Habitas
9. A Sense of Order: Violence, Rumour and Gossip
10. The Cosmopolitan Criminal
11. Concluding: A Community of Practice