Speaking Truths to Power: Policy Ethnography and Police Reform in Bosnia and Herzegovina 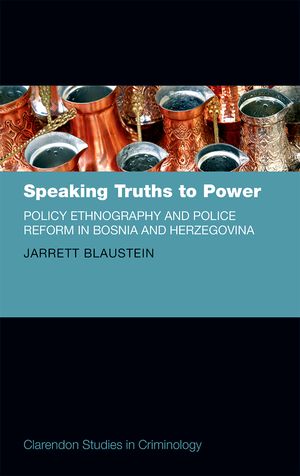 Speaking Truths to Power: Policy Ethnography and Police Reform in Bosnia and Herzegovina presents a rigorous institutional-level analysis of the effects of globalisation on local policing using data generated from two ethnographic case studies conducted in 2011 in the transitional, post-conflict society of Bosnia and Herzegovina. Through a study of the structures, mentalities and practices, it situates the phenomenon of 'glocal policing' in relation to the convergence of development and security discourses following the collapse of the Soviet Union and raises important questions about the purpose and value of criminological engagement with transitional policing.

The idea of 'speaking truths to power' (as opposed to a single 'truth') is illustrated by the author's 2011 fieldwork, covering active police capacity building projects implemented by international organisations. Both studies indicate that global inequalities affect police reform projects, but also that nodal opportunities do exist for seemingly disempowered stakeholders, specifically international development workers and rank-and-file police officers, to exercise reflexivity and use their available power resources to mitigate structural harms, thus rendering their work more responsive to the needs of policy recipients. This mediatory role is analysed through the conceptual lens of 'policy translation' which provides an innovative framework for interpreting how policy meaning and content are altered as a result of their transmission between contexts.

Through detailed and persuasive investigation, Speaking Truths to Power argues that it is time for criminology to move beyond the established structural critiques of transnational policing power. As the author demonstrates, an institutional perspective employing ethnographic methods can ensure that the revealed criticisms adequately reflect the diverse interests, experiences and understandings of the research participants.