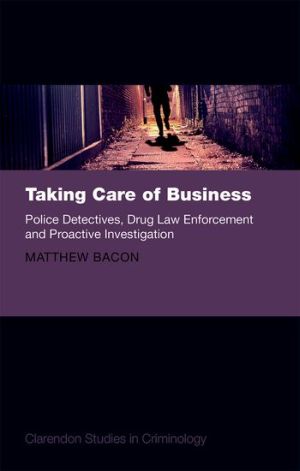 Drawing on data collected from over five hundred hours of direct observation of ordinary police work, both on and off the streets, the chapters are skilfully interwoven with fieldnotes, informal conversations, interviews and analysis of official documents. Taken together, they explore how police officers perceive the drug world and their role in it, translate policy from its written form into action, and utilise intelligence-led policing strategies to instigate covert operations and make cases. There is in-depth examination of the everyday realities of the 'war on drugs', alongside the associated working rules, tacit understandings and underlying assumptions that operate behind the public face of police organizations.

The book also critically examines the most pertinent legislative initiatives, organizational reforms, and shifts in thinking concerning the values, objectives and norms of policing that have occurred over recent decades, which, between them, have contributed to significant changes in the ways that detectives are trained and investigations are controlled and carried out. With highly salient insights regarding operational policing and drug control policy in the current social, economic and political climate, Taking Care of Business is a compelling and important work on contemporary criminal investigation and the policing of drugs. It will be of interest to scholars of criminology, sociology, law, and policy studies, especially those researching and studying policing, regulation, surveillance, drug control policy and the informal economy, as well as policymakers, police practitioners, and criminal justice professionals.