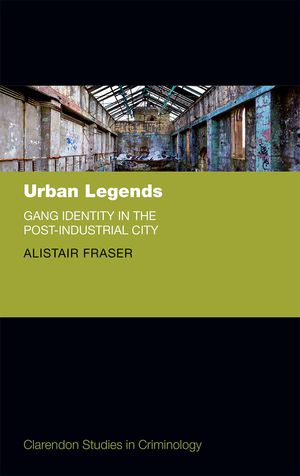 As the youth gang phenomenon becomes an important and sensitive public issue, communities from Los Angeles to Rio, Cape Town to London are facing the reality of what such violent groups mean for their children and young people. Complex dangers and instabilities, as well as high levels of public fear and anger, fuel an amplification of anxious public and political rhetoric in relation to gangs, in which the stereotype of the American street-gang - a ruthless, hierarchical, street-based criminal organisation capable of corrupting youth and fracturing communities - looms large.

Set against this backdrop, Urban Legends: Gang Identity in the Post-Industrial City tells a unique and powerful story of young people, gang identity, and social change in post-industrial Glasgow, challenging the perceptions of gangs as a novel, universal, or pathological phenomenon. Though territorial gangs have been reported in Glasgow for over a century, with striking continuities over this time, there are similarities with street-based groups elsewhere. Using this similarity as the foundation, the book goes on to argue that Glaswegian gangs have a specific historical trajectory that is particular to the city.

Drawing on four years of varied ethnographic fieldwork in Langview, a deindustrialised working-class community, the book spotlights the everyday experiences and understandings of gangs for young people growing up in the area, reasoning that - for some - gang identification represents a root of identity and a route to masculinity, in a post-industrial city that has little space for them.