Punish and Expel: Border Control, Nationalism, and the New Purpose of the Prison 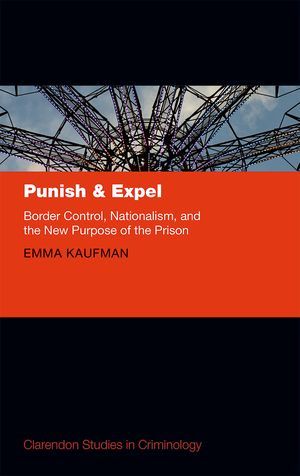 In 2006, after a scandal that gripped the country, the British government began to transform its prison system. Under pressure to find and expel foreigners, Her Majesty's Prison Service began concentrating non-citizens in prisons with 'embedded' border agents. Today, prison officers refer anyone suspected of being foreign to immigration authorities and prisoners facing deportation are detained in special prisons devoted to confining non-citizens. Those who cannot be deported linger, sometimes for years, indefinitely detained behind prison walls. The British approach to foreign nationals reflects a broader trend in punishment. Over the past decade, penal institutions across England, the United States, and Western Europe have become key sites for border control.

Offering the first comprehensive account of the imprisonment of non-citizens in the United Kingdom, Punish and Expel: Border Control, Nationalism, and the New Purpose of the Prison draws on extensive empirical data, based on fieldwork in five men's prisons, to explore the relationship between punishment and citizenship. Using first-hand testimonies from hundreds of prisoners, prison officers, and high-level policy makers, it describes how prisons create a national identity and goes inside citizenship classes and 'all-foreign' prisons, documenting the treatment of non-citizens by other prisoners and staff. Passionately argued and meticulously researched, Punish and Expel links prisons to the history of British colonialism and the contemporary politics of race, whilst challenging readers to rethink their approach to prisons, and to the people held inside them.