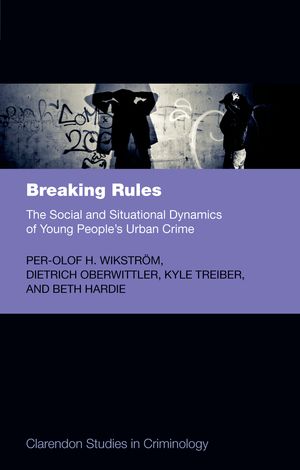 Why do certain people commit acts of crime? Why does crime happen in certain places? Presenting an ambitious new study designed to test a pioneering new theory of the causes of crime, Breaking Rules: The Social and Situational Dynamics of Young People's Urban Crime demonstrates that these questions can only go so far in explaining why crime happens - and, therefore, in preventing it. Based on the work of the Peterborough Adolescent and Young Adult Development Study (PADS+), Breaking Rules presents an analysis of the urban structure of Peterborough and its relation to young people's social life. Contemporary sciences state that behaviour is the outcome of an interaction between people and the environments to which they are exposed, and it is precisely that interaction and its relation to young people's crime involvement that PADS+ explores. Driven by a ground-breaking theory of crime, Situational Action Theory, which aims to explain why people break rules, it implements innovative methods of measuring social environments and people's exposure to them, involving a cohort of 700 young people growing up in the UK city of Peterborough. It focuses on the important adolescent time window, ages 12 to 17, during which young people's crime involvement is at its peak, using unique space-time budget data to explore young people's time use, movement patterns, and the spatio-temporal characteristics of their crime involvement. Presenting the first study of this kind, both in breadth and detail, with significant implications for policy and prevention, Breaking Rules should not only be of great interest to academic readers, but also to policy-makers and practitioners, interested in issues of urban environments, crime within urban environments, and the role of social environments in crime causation.