Justice, Mercy, and Caprice: Clemency and the Death Penalty in Ireland 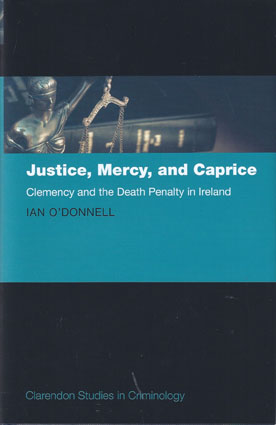 Justice, Mercy, and Caprice is a work of criminal justice history that speaks to the gradual emergence of a more humane Irish state. It is a close examination of the decision to grant clemency to men and women sentenced to death between the end of the civil war in 1923 and the abolition of capital punishment in 1990.

Frequently, the decision to deflect the law from its course was an attempt to introduce a measure of justice to a system where the mandatory death sentence for murder caused predictable unfairness and undue harshness.

In some instances the decision to spare a life sprang from merciful motivations. In others it was capricious, depending on factors that should have had no place in the government's decision-making calculus. The custodial careers of those whose lives were spared repay scrutiny. Women tended to serve relatively short periods in prison but were often transferred to a religious institution where their confinement continued, occasionally for life.

Men, by contrast, served longer in prison but were discharged directly to the community. Political offenders were either executed hastily or, when the threat of capital punishment had passed, incarcerated for extravagant periods.

This book addresses issues that are of continuing relevance for countries that employ capital punishment. It will appeal to scholars with an interest in criminal justice history, executive discretion, and death penalty studies, as well as being a useful resource for students of penology.