Policing and the Condition of England: Memory, Politics and Culture 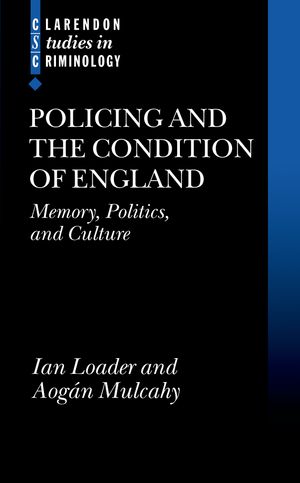 I. Loader, A. Mulcahy

Citizens, it is said, have 'lost faith' in the English police. Opinion polls repeatedly show that trust in, and respect for, the police have declined precipitously from the historically high levels achieved during the 'golden age' of the 1950s. Successive decades of rising crime, political violence and urban disorder, miscarriages of justice, and declining effectiveness have left the police in what seems like a permanent crisis of legitimation. A once revered national institution has become thoroughly profane.

In this major new work on the relationship between English policing and culture, Ian Loader and Aogán Mulcahy reassess and revise this received sociological and popular wisdom on the fate that has befallen the English police. Paying close attention to the symbolic and cultural significance of the police, Loader and Mulcahy document the mix of profane and sacred sensibilities that struggle with one another to determine the contours of what they call English policing culture.

They draw on documentary analysis of official 'representations' of policing, and oral historical research with citizens, police officers, former government ministers and civil servants, to show that, far from being 'demystified', policing is a cultural institution that remains deeply entangled with questions of subjectivity, recognition, belonging and collective identity.

This cultural sociology of English policing sheds new light on the social changes and conflicts that have called police authority into question in the decades since 1945 and offers an important appraisal of what is at stake in the contemporary cultural politics of policing.

Contents:
Settings and Reorientations
1. Losing Faith?: Policing and Social Change in England since 1945
2. On Symbolic Power: Towards a Cultural Sociology of Policing
Narratives of Policing and Culture
3. The Eclipse of the English Bobby
4. The Fracturing of Police Authority
5. The Cultural Politics of Police, Race, and Nation
6. The Job and the Force
7. The Power of the Police Voice
8. Cultures of Police Governance
Past and Present in Contemporary Policing
9. English Policing and Contemporary Culture ;