The Oxford Handbook of the Use of Force in International Law 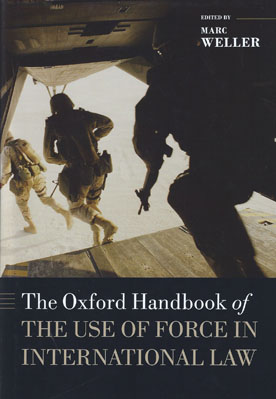 The attempt to outlaw war as a means of national policy and to establish a system of collective security after both World Wars resulted in the creation of the United Nations Charter, which remains a principal point of reference for the law on the use of force to this day. There have, however, been considerable challenges to the law on the prohibition of the use of force over the past two decades.

The work is set in context by an extensive introductory section, reviewing the history of the subject, recent challenges, and addressing major conceptual approaches. Its second part addresses collective security, in particular the law and practice of the United Nations organs, and of regional organizations and arrangements. It then considers the substance of the prohibition of the use of force, and of the right to self-defence and associated doctrines. The next section is devoted to armed action undertaken on behalf of peoples and populations. This includes self-determination conflicts, resistance to armed occupation, and forcible humanitarian and pro-democratic action.

The possibility of the revival of classical, expansive justifications for the use of force is then addressed. This is matched by a final section considering new security challenges and the emerging law in relation to them. Finally, the key arguments developed in the book are tied together in a substantive conclusion.

The Handbook will be essential reading for scholars and students of international law and the use of force, and legal advisers to both government and NGOs.