The Oxford Handbook of International Law in Armed Conflict 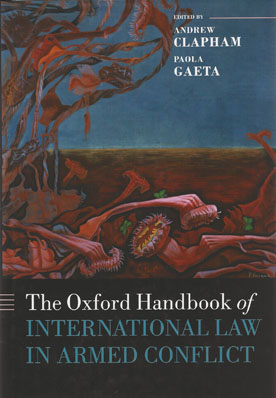 The Handbook consists of 35 Chapters in seven parts. Part A provides the historical background and sets out some of the contemporary challenges. Part B considers the relevant sources of international law. Part C describes the different legal regimes: land warfare, air war fare, maritime warfare, the law of occupation, the law applicable to peace operations, and the law of neutrality.

Part D introduces crucial concepts in international humanitarian law: weapons and the concepts of superfluous injury and unnecessary suffering, the principle of distinction, proportionality, genocide and crimes against humanity, grave breaches and war crimes, and internal armed conflict. Part E looks at fundamental rights: the right to life, the prohibition on torture, the right to fair trial, economic, social and cultural rights, the protection of the environment, the protection of cultural property, the human rights of the members of the armed forces, and the protection of children.

Part F covers important issues such as: the use of force, terrorism, unlawful combatants, the application of human rights in times of armed conflict, refugee law, and the issues of gender in times of armed conflict. Part G deals with accountability issues including those related to private security companies and armed groups, as well as questions of state responsibility brought before national courts and issues related to transitional justice.

Contents:
Preface
A. INTRODUCTION
1. The Law of War: An Historical Perspective
2. Current Challenges to International Humanitarian Law
3. The Role of the International Committee of the Red Cross
B. SOURCES
4. Customary Humanitarian Law Today: From the Academy to the Court Room
5. Treaties in Armed Conflict
C. LEGAL REGIMES
6. Land Warfare
7. Air Warfare
8. Maritime Warfare
9. Law of Occupation
10. The Law Applicable to Peace Operations
11. The Law of Neutrality
D. KEY CONCEPTS FOR HUMANITARIAN LAW
12. Prohibited Weapons and the Issue of Superfluous Injury and Unnecessary Suffering
13. The Principle of Distinction between Civilians and Combatants
14. Proportionality
15. Genocide and other Crimes Against Humanity in Armed Conflict
16. Grave Breaches of the Geneva Conventions and other War Crimes
17. Internal (non-international) Armed Conflicts
E. KEY RIGHTS IN TIMES OF ARMED CONFLICT
18. The Right to Life
19. Torture and Other Cruel, Inhuman or Degrading Treatment or Punishment
20. Fair Trial
21. Economy Social and Cultural Rights
22. Protection of the Environment
23. Protection of Cultural Property
24. Human Rights of Members of the Armed Forces
F. KEY ISSUES IN TIMES OF ARMED CONFLICT
25. Aggression, Self-Defence and the Legitimate Use for Force
26. Terrorism
27. Unlawful Combatants
28. The Applicability of Human Rights Law in Times of Armed Conflict
29. Refugee Law and the Rights of the Displaced in Times of Armed Conflict
30. Gender and Armed Conflict
31. Private Military and Security Companies
G. ANSWERING FOR VIOLATIONS OF THE LAW
32. The Accountability of Armed Groups
33. State responsibility and the Individual Right to Compensation before National Courts
34. Transitional Justice
CONCLUSION