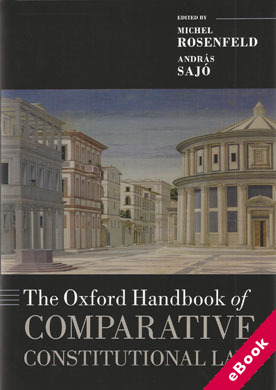 
ISBN13: 9780191640179
Published: May 2012
Publisher: Oxford University Press
Country of Publication: UK
Format: eBook (ePub)
Price: Out of print
The amount of VAT charged may change depending on your location of use.

Driven by the global spread of democratic government and the expansion of international human rights law, the prominence and visibility of the field, among judges, politicians, and scholars has grown exponentially. Even in the United States, where domestic constitutional exclusivism has traditionally held a firm grip, use of comparative constitutional materials has become the subject of a lively and much publicized controversy among various justices of the U.S. Supreme Court.

The trend towards harmonization and international borrowing has been controversial. Whereas it seems fair to assume that there ought to be great convergence among industrialized democracies over the uses and functions of commercial contracts, that seems far from the case in constitutional law. Can a parliamentary democracy be compared to a presidential one? A federal republic to a unitary one? Moreover, what about differences in ideology or national identity?

Can constitutional rights deployed in a libertarian context be profitably compared to those at work in a social welfare context? Is it perilous to compare minority rights in a multi-ethnic state to those in its ethnically homogeneous counterparts? These controversies form the background to the field of comparative constitutional law, challenging not only legal scholars, but also those in other fields, such as philosophy and political theory.

Providing the first single-volume, comprehensive reference resource, the Oxford Handbook of Comparative Constitutional Law will be an essential road map to the field for all those working within it, or encountering it for the first time. Leading experts in the field examine the history and methodology of the discipline, the central concepts of constitutional law, constitutional processes, and institutions - from legislative reform to judicial interpretation, rights, and emerging trends.