The Oxford Handbook of Citizenship 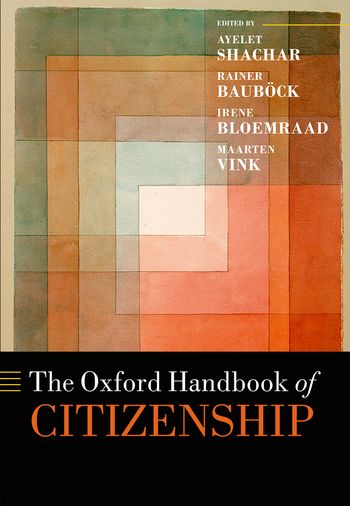 Contrary to predictions that it would become increasingly redundant in a globalizing world, citizenship is back with a vengeance.

The Oxford Handbook of Citizenship brings together leading experts in law, philosophy, political science, economics, sociology, and geography to provide a multidisciplinary, comparative discussion of different dimensions of citizenship: as legal status and political membership; as rights and obligations; as identity and belonging; as civic virtues and practices of engagement; and as a discourse of political and social equality or responsibility for a common good.

The contributors engage with some of the oldest normative and substantive quandaries in the literature, dilemmas that have renewed salience in today's political climate. As well as setting an agenda for future theoretical and empirical explorations, this Handbook explores the state of citizenship today in an accessible and engaging manner that will appeal to a wide academic and non-academic audience. Chapters highlight variations in citizenship regimes practiced in different countries, from immigrant states to 'non-western' contexts, from settler societies to newly independent states, attentive to both migrants and those who never cross an international border. Topics include the 'selling' of citizenship, multilevel citizenship, in-between statuses, citizenship laws, post-colonial citizenship, the impact of technological change on citizenship, and other cutting-edge issues.

This Handbook is the major reference work for those engaged with citizenship from a legal, political, and cultural perspective. Written by the most knowledgeable senior and emerging scholars in their fields, this comprehensive volume offers state-of-the-art analyses of the main challenges and prospects of citizenship in today's world of increased migration and globalization. Special emphasis is put on the question of whether inclusive and egalitarian citizenship can provide political legitimacy in a turbulent world of exploding social inequality and resurgent populism.