This book is now Out of Print.
A new edition has been published, the details can be seen here:
The Oxford Handbook of International Trade Law 2nd ed. isbn 9780192868381 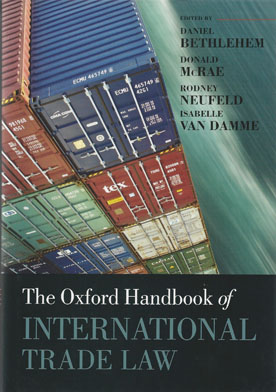 Emerging from this new WTO process is an international trade law system that is in some respects self-contained and in other respects overlapping and linked to other international legal, economic and political regimes. The 'boundaries' of trade law are now generating enormous interest and controversy which, at a broader level, is subsumed within the debate over globalisation.

The detailed development of the rules of international trade is being examined with increasing frequency by scholars, government officials and trade law practitioners. But how does it fit with existing systems? How it is modified by them? How does the international trade law system affect and modifiy other regimes?

The final part of the book explores the wider framework of the world trading system, considering issues including the relationship of the WTO to civil society, the use of economic sanctions, state responsibility, and the regulation of multinational corporations.

Oxford Handbooks offer authoritative and up-to-date surveys of original research in a particular subject area. Specially commissioned essays from leading figures in the discipline give critical examinations of the progress and direction of debates. Oxford Handbooks provide scholars and graduate students with compelling new perspectives upon a wide range of subjects in the humanities and social sciences.