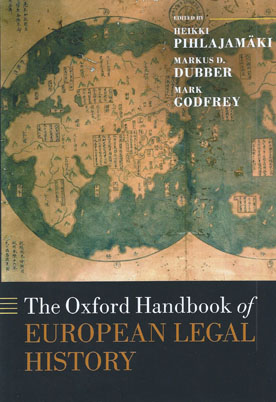 European law, including both civil law and common law, has gone through several major phases of expansion in the world. European legal history thus also is a history of legal transplants and cultural borrowings, which national legal histories as products of nineteenth-century historicism have until recently largely left unconsidered.

The Oxford Handbook of European Legal History supplies its readers with an overview of the different phases of European legal history in the light of today's state-of-the-art research, by offering cutting-edge views on research questions currently emerging in international discussions.

The Handbook takes a broad approach to its subject matter both nationally and systemically. Unlike traditional European legal histories, which tend to concentrate on "heartlands" of Europe (notably Italy and Germany), the Europe of the Handbook is more versatile and nuanced, taking into consideration the legal developments in Europe's geographical "fringes" such as Scandinavia and Eastern Europe.

The Handbook covers all major time periods, from the ancient Greek law to the twenty-first century. Contributors include acknowledged leaders in the field as well as rising talents, representing a wide range of legal systems, methodologies, areas of expertise and research agendas.