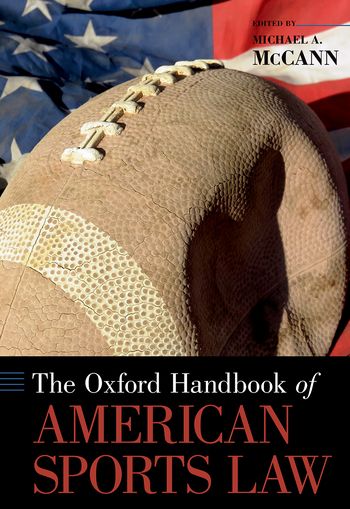 Edited by: Michael A. McCann

The Oxford Handbook of American Sports Law takes the reader through the most important controversies and critical developments in law and U.S. sports. Over the course of 30 chapters, leading scholars explore this expanding and captivating area of law. The Handbook is the first book to gather dozens of perspectives on sports law controversies in the United States, and will be of interest to those who study and practice sports law, as well as journalists, broadcasters, and legally minded sports fans.

The Oxford Handbook of American Sports Law incorporates analysis of key historical events in sports law-such as the rise of free agency in professional sports and the concept of "amateurism" for college athletes-and their broader context. Contemporary legal controversies in U.S. sports and their accompanying questions are also of central importance: In a sensible legal system, how would long-term neurological injuries from contact sports be addressed? How would the use of racially insensitive team names be resolved? How would a seemingly trivial dispute over air pressure in footballs be studied from the competing perspectives of players, teams, and leagues? The Oxford Handbook of American Sports Law weighs not just the facts, but how courts and lawmakers ought to consider the most important questions at stake.

The essays in this volume also canvass the types of legal controversies in sports likely to surface in the future. This is particularly true of law and technology matters, including those related to broadcasting and streaming. Legal doctrine has been and will continue to be forced to adapt to these developments, and the Handbook both forecasts coming debates and outlines where the law may be headed.

Contents:
1. Introduction: American Sports Law through Deflategate by Michael A. McCann
2. The Evolution of the Power of the Commissioner in Professional Sports by Jimmy Golen & Warren K. Zola
3. Leagues and Owners: The Donald Sterling Story by Michael A. McCann
4. The Commissioner's Power to Discipline Players for On- and Off-Field Misconduct by Richard T. Karcher
5. The Regulation of Doping in U.S. and International Sports by Maureen A. Weston
6. Drugs in Professional Sports by Todd Clark
7. Blood Sports in an Age of Liability by Jeffrey Standen
8. Sports and American Tort Law by Geoffrey Rapp
9. The Increasing Role of Disability Issues in U.S. Sports Law by Dionne Koller
10. Collective Bargaining and Workforce Protections in Sports by Nicholas M. Ohanesian
11. Collective Bargaining in Professional Sports: The Duel Between Players and Owners and Labor Law and Antitrust Law by Gabe Feldman
12. The Single-Entity Doctrine of Antitrust as Applied to Sports Leagues by Stephen F. Ross
13. Eligibility Rules in Professional Sports by Glenn M. Wong and Christopher R. Deubert
14. Athlete Representation by Ed Edmonds
15. Identity and Speech in Sport in the Social Media Era by Jimmy Sanderson
16. The "Shifting Line" of Sports Betting Legalization by Daniel L. Wallach
17. The Enduring Power of the Sports Broadcasting Act by Nathaniel Grow
18. Youth and High School Sports Law Issues by Brian L. Porto
19. College Athletics: The Growing Tension Between Amateurism & Commercialism by Warren K. Zola
20. Title IX and U.S. College Sports: Contemporary Challenges to Compliance by Erin E. Buzuvis
21. Recreational Sports Law by Thomas A. Baker III
22. Arbitration and the Olympic Athlete by Sean Nolon
23. Competition Law, Free Movement of Players, and Nationality Restrictions by Ryan Gauthier
24. Athlete Trademarks: Names, Nicknames, & Catchphrases by Alexandra J. Roberts
25. Trade Secrets and Information Security in the Age of Sports Analytics by Roger Allan Ford
26. The Role of Bioethics in Sports Law by Alan Milstein
27. The Rooney Rule's Reach: How the NFL's Equal Opportunity Initiative for Coaches Inspired Local Government Reform by N. Jeremi Duru
28. Sports in the Context of Social Media Law by Jon M. Garon
29. Public Development for Professional Sports Stadiums by Irwin P. Raij and Alexander Chester
30. Daily Fantasy Sports and PASPA: How to Assess Whether the State Regulation of Daily Fantasy Sports Contests Violates Federal Law by Daniel L. Wallach