Human Rights and Judicial Review in Australia and Canada: The Newest Despotism? 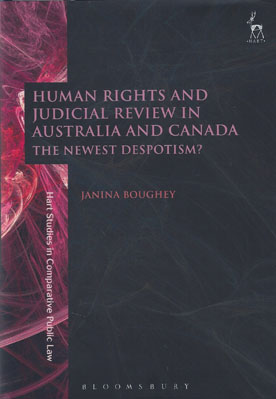 It is commonly asserted that bills of rights have had a 'righting' effect on the principles of judicial review of administrative action and been a key driver of the modern expansion in judicial oversight of the executive arm of government.

A number of commentators have pointed to Australian administrative law as evidence for this 'righting' hypothesis. They have suggested that the fact that Australia is an outlier amongst common law jurisdictions in having neither a statutory nor a constitutional framework to expressly protect human rights explains why Australia alone continues to take an apparently 'formalist', 'legalist' and 'conservative' approach to administrative law.

Other commentators and judges, including a number in Canada, have argued the opposite: that bills of rights have the effect of stifling the development of the common law. However, for the most part, all of these claims remain just that-as there has been limited detailed analysis of the issue, and no detailed comparative analysis of the claims' veracity.

This book analyses in detail administrative and human rights law in Australia and Canada, arguing that both jurisdictions have reached remarkably similar positions regarding the balance between judicial and executive power, and between broader fundamental principles including the rule of law and the separation of powers. It will provide valuable reading for all those researching judicial review and human rights.