Entick v Carrington: 250 Years of the Rule of Law 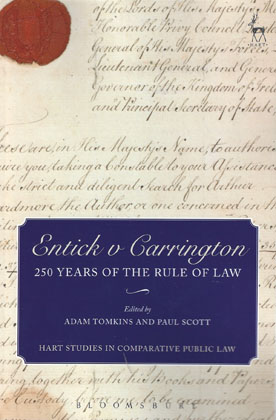 Entick v Carrington is one of the canons of English public law and in 2015 it will be 250 years old. In 1762 the Earl of Halifax, one of His Majesty’s Principal Secretaries of State, despatched Nathan Carrington and three other of the King’s messengers to John Entick’s house in Stepney.

They broke into his house, seizing his papers and causing significant damage. Why? Because he was said to have written seditious papers published in the Monitor. Entick sued Carrington and the other messengers for trespass.

The defendants argued that the Earl of Halifax had given them legal authority to act as they had. Lord Camden ruled firmly in Entick’s favour, holding that the warrant of a Secretary of State could not render lawful actions such as these which were otherwise unlawful.

The case is a canonical statement of the common law’s commitment to the constitutional principle of the rule of law. In this collection, leading public lawyers reflect on the history of the case, the enduring importance of the legal principles for which it stands, and the broader implications of Entick v Carrington 250 years on.