The Dynamics of Exclusionary Constitutionalism: Israel as a Jewish and Democratic State 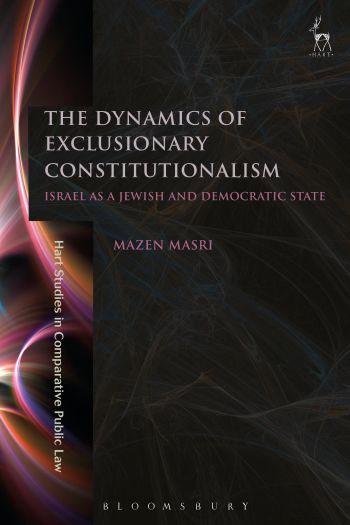 What does Israel's definition as a 'Jewish and democratic' state mean? How does it affect constitutional law and the people living in Israel? This book provides a unique and detailed examination of the consequences of the 'Jewish and democratic' definition. It seeks to explore how the definition affects the internal ordering of the state, the operation of the law, and the ways it is used to justify, protect and regenerate certain features of Israeli constitutional law.

The book offers a novel perspective on the Jewish and democratic definition rooted in constitutional theory and informed by a socio-legal approach. Relying on a wide range of secondary sources, as well as a significant number of court cases and statutes, the book argues that the definition is deeply embedded in the constitutional structure in different ways, and operates, as a matter of law, in a manner that concentrates political power in the hands of the Jewish citizens and excludes the Arab citizens in Israel from the process of exercising political power.

The book is a timely intervention in an increasingly important question, and is essential reading for those who want to understand Israel's character, its relationship with the constitutional order, and its impact on society.

Contents:
Introduction
Chapter 1- What is a "Jewish and democratic" State?
Chapter 2- Locating the People in Israel: The Social Contract, the Basic Norm, and the Beginnings of the State
Chapter 3- Engineering the People: Israel's Immigration and Citizenship Laws and Policies
Chapter 4- Drawing the Red Lines: Political Representation and the Jewish and Democratic Definition
Chapter 5- The Constitution in Action: Constitutional Amendments, Law, and Governance
Conclusions- Moving Beyond Exclusionary Constitutionalism

Federalism and the Rights of Persons with Disabilities: The Implementation of the CRPD in Federal Systems and Its Implications
Edited by: Delia Ferri, Francesco Palermo, Giuseppe Martinico
ISBN 9781509962433
To be published June 2023
Hart Publishing
£90.00