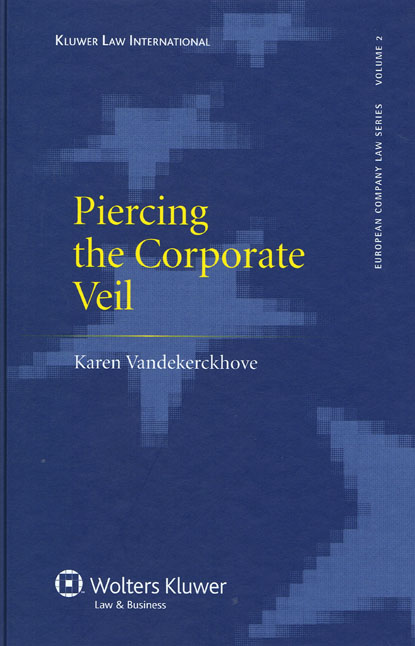 This study clears up some of the mists hanging around the concept of corporate veil piercing. What exactly is corporate veil piercing and in which situations does it occur? What are the legal rules involved? Following a short overview of the applicable law in the six legal systems that are the subject of this study-those of Belgium, the Netherlands, France, Germany, the United Kingdom, and the United States-the author proceeds with a more profound analysis from a functional comparative perspective, starting from particular situations that typically call for shareholder liability for the debts of subsidiary companies.

Among the grounds for veil piercing claims the author discusses the following, along with the substantive and procedural law and important cases associated with each in the six jurisdictions covered:-

In the course of the presentation, a thorough analysis of legal scholarship in the area leads to numerous applications of the various theories and doctrines that can be brought to bear on veil piercing cases. In addition, an in-depth discussion of the international dimension of corporate veil piercing focuses on the question of which laws should govern the liability of a parent corporation for the debts of its subsidiary.

Throughout, the author’s clear insight into the substantive law of veil piercing sheds light on traditional misconceptions in the conflict of laws on the issue. She also details initiatives undertaken by various international bodies, including the United Nations, the Organization for Economic Cooperation and Development, the European Union, the International Court of Justice, and the International Labour Organization.

Dr Vandekerckhove’s study is the most comprehensive, far-reaching, and up-to-date study of this important growing area of corporate law practice. As such it will prove of great value to practitioners, judges, and academics in the field, and will prove its worth anywhere in the world where the presence of multinational corporations is felt.