The Europeanisation of English Tort Law 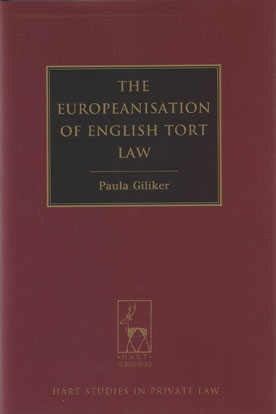 Tort law is often regarded as the clearest example of common law reasoning. Yet, in the past 40 years, the English common law has been subject to European influences as a result of the introduction of the European Communities Act 1972 and the Human Rights Act 1998.

EU Directives have led to changes to product liability, health and safety law, and defamation, while Francovich liability introduces a new tort imposing State liability for breach of EU law. The 1998 Act has led to developments in privacy law and forced courts to reconsider their approach to public authority liability and freedom of expression in defamation law.

This book has two goals: to identify how English tort law has changed as a result of Europeanisation - broadly defined as the influence of European Union and European human rights law - and to examine how such developments have impacted on traditional common law reasoning. Has Europeanisation led to changes to the common law legal tradition or has the latter proved more resistant to change than might have been expected?