The Irreducible Core of the Trust 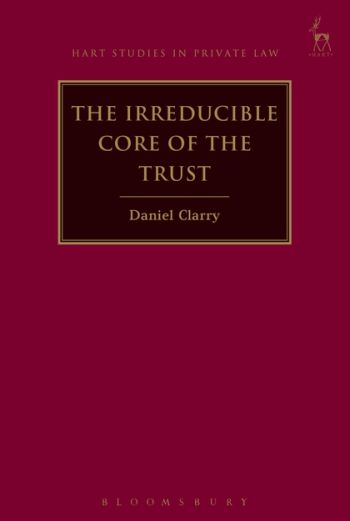 Much ink has been spilt in attempts to describe the nature and structure of trusts in the common law tradition. However, far from developing a coherent and internally consistent understanding of trusts, such attempts have caused a deep schism to be formed between obligatory and proprietary theories of the trust. This has a polarising effect on the academic discourse and stifles the further, conceptual development of the law.

This book gives a full account of the irreducible core of the trust by applying an analytical framework of fundamental legal conceptions and relations derived from the American theorist, Wesley N. Hohfeld. By setting aside the corpus of trusts law that is either 'default' (meaning that, in the absence of some contrary stipulation in the trust deed, the particular law would apply) or is left to the subjective expression of a settlor in creating a trust. This leaves only the mandatory rules of trusts law. From this, it ought to be possible to redefine trusts by identifying the legal relations that must exist in every private express trust (collectively, 'the irreducible core of the trust') irrespective of contrary drafting in a trust instrument. In doing so, a skeleton of legal relations will be exposed to exist in all trusts, which are motivated by two correlated themes of accountability and enforceability.