Law in Politics, Politics in Law 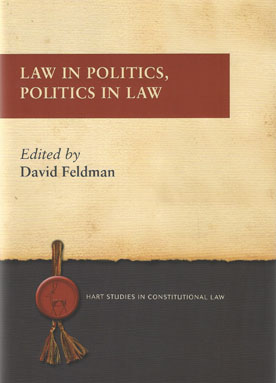 A great deal has been written on the relationship between politics and law. Legislation, as a source of law, is often highly political, and is the product of a process or the creation of officials often closely bound into party politics.

Legislation is also one of the exclusive powers of the state. As such, legislation is plainly both practical and inevitably political; at the same time most understandings of the relationship between law and politics have been overwhelmingly theoretical. In this light public law is often seen as part of the political order or as inescapably partisan.

We know relatively little about the real impact of law on politicians through their legal advisers and civil servants. How do lawyers in government see their roles and what use do they make of law? How does politics actually affect the drafting of legislation or the making of policy?

This volume will begin to answer these and other questions about the practical, day-to-day relationship between law and politics in a number of settings. It includes chapters by current and former departmental legal advisers, drafters of legislation, law reformers, judges and academics, who focus on what actually happens when law meet politics in government.

Contents:
Part 1: Introduction
1. Beginning at the Beginning: The Relationships between Politics and Law David Feldman
Part 2: Lawyer-Politicians
2. Lawyers, MPs and Judges Ross Cranston
3. Lawyers in the House of Commons David Howarth
4. The Form and Language of Legislation Alan Rodger
Part 3: Lawyers Advising Government 5. Legislation and Politics Stephen Laws
6. Whitehall, Transparency, and the Law David Seymour
7. The Role of Public International Lawyers in Government Michael Wood
8. Government Legal Advisers through the Ethics Looking Glass Matthew Windsor
Part 4: Politics and Legal Change
9. Law Reform in a Political Environment: The Work of the Law Commissions Elizabeth Cooke and Hector MacQueen
10. Parliament Act 1911 in its Historical Context Philip Norton
11. The Parliament Act 1949 Chris Ballinger
12. The Realities of the Parliament Act 1911 Daniel Greenberg
13. The Impact of the Parliament Acts 1911 and 1949 on a Government's Management of its Legislative Timetable, on Parliamentary Procedure and on Legislative Drafting Rhodri Walters
Part 5: Politics, the Constitution, and Beyond
14. International Law and Great Power Politics Matthew Parish
15. Law and Democracy in a Human Rights Framework Philip Sales
16. Politics, Law and Constitutional Moments in the UK Dawn Oliver
17. Looking Back and Moving On David Feldman