Making and Amending the Constitution 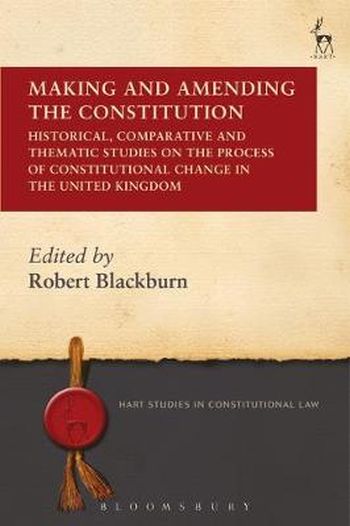 This book provides an in-depth study of the making and amendment of constitutions and the structures of government, and considers a range of theoretical and practical issues of relevance to the development of political and constitutional reform in the UK.

In part one, the book begins by considering the past and present processes of constitutional reform in the UK, the existing institutional arrangements for public law reform, and particular methods adopted in selected cases of "constitution building" activity, including ones relating to the devolved systems of governance in Scotland, Wales and Northern Ireland. Part two then contains a collection of studies of constitution-making or major constitutional amendment processes adopted in a number of other countries across Europe and the Commonwealth, drawing conclusions and presenting recommendations on lessons for the UK in shaping its own future arrangements in making future constitutional reform. Part three focuses on public engagement in the process of reform, in the belief that now more than ever successful changes in the way we are governed must carry popular and media interest and support.

The book studies procedures and precedents in the UK and abroad for constitutional conventions and assemblies that contain an elected or popular element, and new techniques for establishing opinion and deliberative democracy on constitutional issues.

Essays on the History of Parliamentary Procedure: In Honour of Thomas Erskine May
Edited by: Paul Evans
ISBN 9781509937523
Published April 2020
Hart Publishing
£41.99

Essays on the History of Parliamentary Procedure: In Honour of Thomas Erskine May
Edited by: Paul Evans
ISBN 9781509900206
Published December 2017
Hart Publishing
£95.00

Essays on the History of Parliamentary Procedure: In Honour of Thomas Erskine May (eBook)
Edited by: Paul Evans
ISBN 9781509900213
Published December 2017
Hart Publishing
£37.79