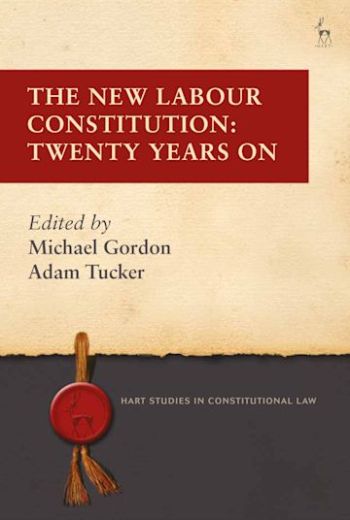 The New Labour government had a defining influence on the development of the modern UK constitution. Labour’s 1997 general election manifesto promised devolution, a Human Rights Act, House of Lords reform, elected city mayors, freedom of information, electoral reform, modernisation of the House of Commons, party funding reform, the reinvigoration of local government, and more. Many, but not all, of these aspirations were realised, and others were subsequently added to the programme, including the creation of the Supreme Court.

The twentieth anniversary of the election of the New Labour government in 1997 provides an ideal opportunity to assess the way in which this major programme of constitutional reform changed the nature of the UK constitution. This book brings together essays from leading academics in UK public law and politics which assess different aspects of the ‘New Labour Constitution’ twenty years on. In combination, these essays analyse the scale and significance of substantive changes, the process of constitutional reform established during this period, and the legacy of New Labour’s constitutional project. Based on a conference held at the University of Liverpool in July 2017, funded by the British Academy and Leverhulme Trust, this book combines legal and political perspectives to explore a foundational period for the contemporary UK constitution.