The Codes of the Constitution 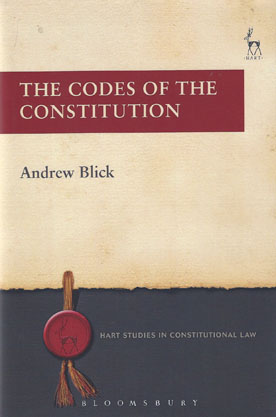 This book considers the growing tendency for the production of publicly available, official documents setting out key values and practices of the UK constitution.

The various texts considered include the Ministerial Code, the Cabinet Manual, the Civil Service Code, the Devolution Memorandum of Understanding, Core Tasks for Select Committees and the Guide to Judicial Conduct. The author discusses the historic development of this process of codification, and makes international comparisons. He considers the purpose and constitutional significance of these documents, taking into account how they are devised, and discussing the prospects for their use in judicial review.

It is noted that these codes deal in written form with issues previously handled in more amorphous fashion, or in texts not made public. Their present status is not always clear, and often they lack a statutory basis. In some instances they seek to encapsulate that which already exists; at other times to create anew.

The book then provides accounts of the content of the codes. It describes different features of the UK constitution as set out in these documents, including the Cabinet and Prime Minister, ministers and civil servants, Parliament, devolved institutions and local government and the judiciary. It considers codification specific to the coalition government formed in 2010.

The author places the provisions he identifies in their historical and constitutional context, and discusses their appropriateness and effectiveness. He asks what difference these various codes have made. The book concludes by assessing the extent to which these documents amount to a coherent whole; and considering prospects for the future. It makes proposals for improving the processes by which codes are created and implemented.

Essays on the History of Parliamentary Procedure: In Honour of Thomas Erskine May
Edited by: Paul Evans
ISBN 9781509937523
Published April 2020
Hart Publishing
£41.99

Essays on the History of Parliamentary Procedure: In Honour of Thomas Erskine May (eBook)
Edited by: Paul Evans
ISBN 9781509900213
Published December 2017
Hart Publishing
£37.79

Essays on the History of Parliamentary Procedure: In Honour of Thomas Erskine May
Edited by: Paul Evans
ISBN 9781509900206
Published December 2017
Hart Publishing
£95.00