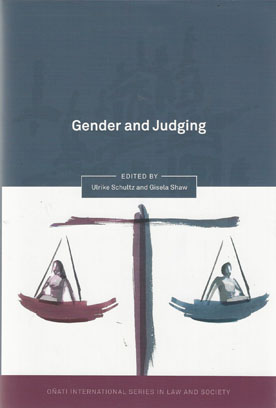 Does gender make a difference to the way the judiciary works and should work? Or is gender-blindness a built-in prerequisite of judicial objectivity? If gender does make a difference, how might this be defined? These are the key questions posed in this collection of essays, by some 30 authors, from 15 countries representing all five continents, whose answers draw on various theoretical approaches, including gender, feminist, and sociological theories.

The book's pressing topicality is underlined by the fact that well into the modern era male opposition to women's admission to, and progress within, the judicial profession has been largely based on the argument that their very gender programmes women to show empathy, partiality and gendered prejudice - in short essential qualities running directly counter to the need for judicial objectivity.

It took until the last century for women to begin to break down such seemingly insurmountable barriers. And even then, there remain a number of countries where even this first step is still waiting to happen. In all of them, there remains a more or less pronounced glass ceiling to women's judicial careers.

Contents:
Introduction: Gender and Judging: Overview and Synthesis
PART 1: PIONEERS AND EMINENT WOMEN JUDGES
1.1. Becoming the First Women Judges in Ontario: Women Lawyers, Gender and the Politics of Judicial Appointment
1.2. Profiles in Leadership: Eminent Women Judges in the United States
1.3. The Entry and Integration of Women into Judicial Positions in Israel
1.4. First Female Judges in the Weimar Republic in Germany: Reflections on Difference
PART 2: WOMEN JUDGES’ WORK AND CAREERS
2.1. Feminisation of the French ‘Magistrature’: Gender and Judging in a Feminised Context
2.2. ‘I was noticed and I was asked …’ Women’s Careers in the Judiciary. Results of an empirical study for the
Ministry of Justice in Northrhine-Westfalia, Germany
2.3. Women Judges and Magistrates in Kenya: Challenges, Opportunities and Contributions
2.4. The Impact of Women on the Administration of Justice in Syria and the Judicial Selection Process
2.5. Skills for Judicial Work: Comparing Women Judges and Women Magistrates
2.6. Professional Stress, Discrimination and Coping Strategies: Similarities and Differences between Female
and Male Judges in Switzerland
PART 3: GENDER PERSPECTIVES IN JUDGING
3.1. Gendered Experiences of a Judge in Germany
3.2. Women Judges in the Netherlands
3.3. Gender and Judging in Traditional and Modern Societies: A Comparison of Two Case Studies (Ivory Coast and Italy)
3.4. Gender Arguments and Gender Perspective in Legal Judgments in Argentina
3.5. Do Women on South Africa’s Courts Make a Difference?
PART 4: GENDERED CONSTRUCTION OF JUDGES
4.1. ‘May it Please the Court’. Forming Sexualities as Judicial Virtues in Judicial Swearing-in Ceremonies
4.2. Let History Judge? Gender, Race, Class and Performative Identity: A Study of Women Judges in England and Wales
PART 5: FEMINIST JUDGES AND FEMINIST ADJUDICATION
5.1. Must Feminist Judges Self-identify as Feminists?
5.2. Justice Marcia Neave: Case Study of a Feminist Judge
5.3. What’s in a Label? Argentine Judges’ Reluctance to Call Themselves Feminists
5.4. A Feminist Adjudication Process: Is There Such a Thing?
PART 6: QUOTAS AND DIVERSITY
6.1. Which Judicial Selection Systems Generate the Most Women Judges? Lessons from the United States
6.2. Gender Quotas for the Judiciary in England and Wales
6.3. Rethinking Judicial Diversity
PART 7: GENDER AND JUDICIAL EDUCATION
7.1. Gender and Judicial Education in India
7.2. Gender and Judicial Education in Japan
7.3. Engendering the Judiciary—Lessons from the Philippines
7.4. Gender Training for the Judiciary in Cambodial
7.5. Do German Judges Need Gender Education?

The Right to the Continuous Improvement of Living Conditions: Responding to Complex Global Challenges
Edited by: Jessie Hohmann, Beth Goldblatt
ISBN 9781509947874
To be published May 2023
Hart Publishing

Combining the Legal and the Social in Sociology of Law: An Homage to Reza Banakar
Edited by: Håkan Hydén, Roger Cotterrell, David Nelken, Ulrike Schultz
ISBN 9781509959389
To be published February 2023
Hart Publishing