This book is now Out of Print.
A new edition has been published, the details can be seen here:
Employment Contracts In Private International Law 2nd ed isbn 9780198860327 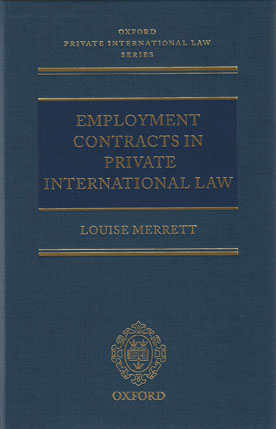 This book offers an exposition of the substantive law background, covering the jurisdictional and the choice of law rules to identify commonality and overlaps, and explore their rationale in order to provide a better understanding of each. Each chapter is usefully concluded in sections which summarise the analysis and scope of the coverage.

The Brussels I Regulation and the Rome Convention and Rome I Regulation contain special regimes of rules for employment contracts. These private international law rules seek to protect the weaker party - the employee - and mandatory rules play an important role in this.

Employment Contracts in Private International Law deals with the common law rules on jurisdiction, and emphasises how those rules are likely to apply in an employment context. It considers the special rules on employment in the various European instruments on jurisdiction and choice of law.

The scope of the book includes coverage of the difficult overlapping provisions which apply to posted workers, as well as other claims which might arise out of the employment relationship such as claims in tort or for breach of statutory duty. Problematic areas of private international law - such as the difficult-to-negotiate role of tort law and its interaction with contract - are given special attention, and restrictive covenants are also addressed in a dedicated chapter.