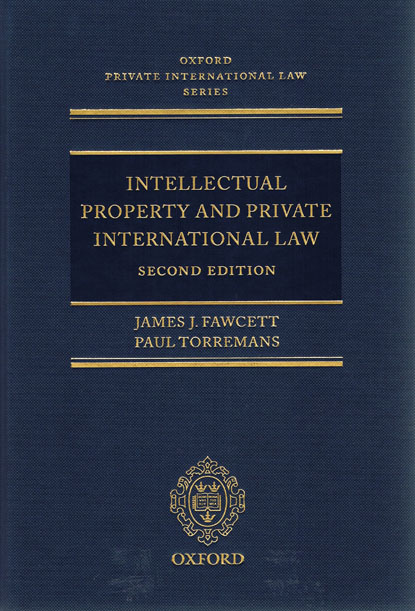 Intellectual property has traditionally been regulated on a territorial basis. However, the protection and commercial exploitation of intellectual property rights such as patents, trade marks, designs and copyright occurring across borders are now seldom confined to one jurisdiction.

This book considers how the introduction of a foreign element inevitably raises potential problems of private international law, ranging from establishing which court has jurisdiction and which is the applicable law to securing the recognition and enforcement of foreign judgments.

The Internet has brought a significant increase in the scale of this phenomenon and valuable new chapters have been added to this edition to reflect this. Nationally protected trade marks are now used globally on websites and copyright material is distributed, communicated and copied in a world without borders. Patents have already been licensed on a transnational basis for several decades. All this raises questions of jurisdiction and applicable law.

The well-respected and expert author team address such questions as; which court will have jurisdiction to deal with the issues arising from intellectual property rights and their exploitation in an international context? And which national law will the court with jurisdiction apply? Private international law questions increasingly arise and the two disciplines that previously operated in different spheres are increasingly obliged to co-operate.

Although such issues are becoming increasingly important, a dearth of literature exists on the subject. Fawcett and Torremans remedy that neglect and provide a systematic and comprehensive analysis of the topic that will be welcomed by practitioners and scholars alike.