Claims for Contribution and Reimbursement in an International Context 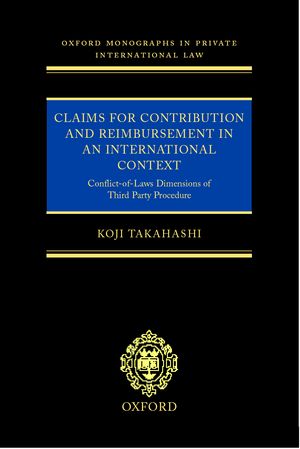 This book systematically examines claims for contribution and reimbursement in an international context. As such claims are often made in third party proceedings, particularly detailed analyses are given to the conflict-of-laws dimensions of third party procedure. The issues considered include:-

Where the party to two adjacent contracts in a chain transaction has an expectation that his liability under one contract will be covered back-to-back by his right of reimbursement under the other contract, to what extent is it possible to argue that the reimbursement claim is governed by the same law as the governing law of the original claim so as to ensure the correspondence of liability and the right of reimbursement?

This book provides a valuable guide to this complex area for practitioners advising clients who wish to bring, or are being threatened with, a claim for contribution or reimbursement in an international context. Its scholarly approach will also stimulate academic interest.