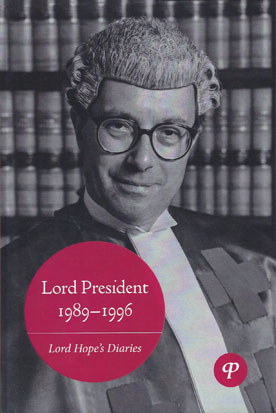 The third in the series deals with David Hope’s term of office as Lord President of the Court of Session. Much of his time was taken up with hearing appeals and writing judgments and visiting many prisons in his capacity as Lord Justice General.

He had many other duties to perform as head of the Court and within a few months of taking up office he had to find a way of suppressing false but persistent rumours about ‘Gay Judges’.

His attempts to respond positively to pressures for reform were not always successful, but he did introduce a scheme for the filming of criminal trials and settled the rules for the introduction of solicitor advocates to the supreme courts. He attended judicial conferences at home and overseas and played a leading role in the state visit to Scotland of the King of Norway.