Revisiting the Contracts Scholarship of Stewart Macaulay: On the Empirical and the Lyrical 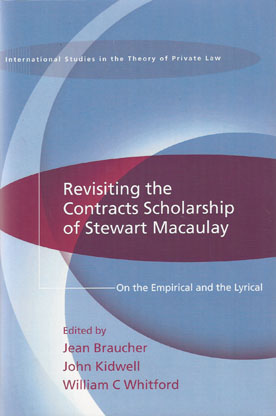 This book contains the papers prepared for a conference held at the Wisconsin Law School in 2011 to honour the work of Stewart Macaulay, one of the most famous contracts scholars of his generation.

Macaulay has been writing about contracts and contract law for over 50 years; the 1960s were particularly productive years for him, when he introduced many novel ideas into the scholarly world.  Macaulay's foundational work for what is now called relational contract theory was published during this period.  Macaulay is also known for his use of empirical research and interdisciplinary theories to illuminate our knowledge of contracting practices.

Contents:
'Non-Contractual Relations in Business - A Preliminary Study' (1963) 28 Am Soc Rev 1 Stewart Macaulay
Excerpts from 'Private Legislation and the Duty To Read - Business Run by IBM Machine, the Law of Contracts and Credit Cards' (1966)
19.
Vanderbilt L Rev 1051 Stewart Macaulay
Excerpts from 'The Real Deal and the Paper Deal': Empirical Pictures of Relationships, Complexity and the Urge for Transparent Simple Rules' (2003) 66 Modern L Rev 44 Stewart Macaulay
Part I. Relational Contracts and Theory
1. Is the World of Contracting Relations One of Spontaneous Order or Pervasive State Action? Stewart Macaulay Scrambles the Public-Private Distinction Robert W Gordon
2. Empiricism's Crucial Question and the Transformation of the Legal System Edward Rubin
3. The Promise and the Peril of Relational Contract Theory Robert E Scott
4. Ambition and Humility in Contract Law Jay M Feinman
Part II. Contractual Relations Between Businesses: Law and Behaviour
5. What Do We Mean By the Non-Use of Contract? David Campbell
6. Conflict and Collaboration in Business Organisation: A Preliminary Study Li-Wen Lin and Josh Whitford
7. What Mistakes Do Lawyers Make in Complex Business Contracts, And What Can and Should be Done About Them? Some Preliminary Thoughts. Claire A Hill
8. The Role of Contract: Stewart Macaulay's Lessons from Practice Brian H Bix
Part III. Contractual Relations with Individuals: Law and Behaviour
9. What is the Relational Theory of Consumer Form Contract? Ethan J Leib
10. Acquiring Children Contractually: Relational Contracts at Work at Home Carol Sanger
11. Is There a 'Duty to Read'? Charles L Knapp
Part IV. Relational Critiques of Contract Doctrine
12. Restitution Without Context: An Examination of the Losing Contract Problem in the Restatement (Third) of Restitution William J Woodward Jr
13. Contract in a Pre-Realist World: Professor Macaulay, Lord Hoffmann and the Rise of Context in the English Law of Contract John Wightman
14. The Deregulatory Effects of Seventh Circuit Jurisprudence Deborah Waire Post
15. Doctrines of Last Resort D Gordon Smith