Karl Polanyi, Globalisation and the Potential of Law in Transnational Markets 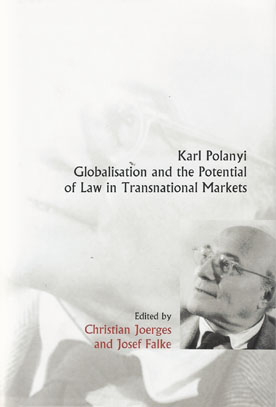 The patterns and impact of globalisation have become a common concern of all international jurists, sociologists, political scientists and philosophers.

Many have observed the erosion of the powers of nation states and the emergence of new transnational governance regimes, and have sought to understand their internal dynamics, re-regulatory potential and normative quality. Karl Polanyi's seminal "Great Transformation" is attracting new attention to such endeavours, mirroring a growing sensitivity to the social and economic risks of dis-embedding politics. Their re-construction by Polanyi, including his warning against a commodification of labour, land and money, provide the trans-disciplinary reference point for the contributions to this book.

Political economy, political theory, sociology and political science inform this discussion of Polanyi´s insights in the age of globalisation. Further theoretical essays and case studies look at his "false commodities": money, labour (and services), land (and the environment). Jurists have hardly ever discussed Polanyi, and the law has not been taken very seriously among Polanyians.

It is nevertheless clear that economic stability and social protection are simply inconceivable without the visible hand of law. The legal discussion in the concluding chapters do not, and cannot, depart directly from such premises. The framework of their analyses is, instead, informed by current debates on the emergence of para-legal regimes, the fragmentation of international law and the prospects of constitutional perspectives within which the rule of law and the notion of law-mediated legitimate governance are established.

Polanyi´s notion of the co-originality of dis-embedding moves and re-imbedding countermoves can, however, be usefully employed in the re-construction of the sociological background of the of the moves and tensions which jurists discern.