Understanding Institutional Shareholder Activism: A Comparative Study of the UK and China 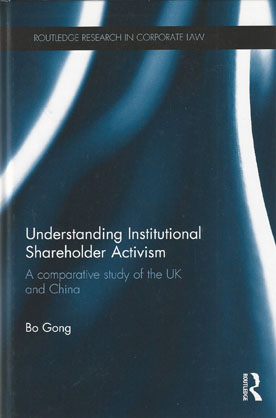 Institutional shareholder participation has long been considered as vital to good corporate governance yet its potential does not seem to have been realized.

The recent banking crisis exposed the passivity of some institutional shareholders, many of whom appear to have chosen to sell their stakes in the banks rather than intervene or challenge the board when they realized the strategies followed by the banks were excessively risky. Institutional shareholders' role to scrutinize and monitor the decisions of boards and executive management in the banking sector in the UK is considered by many to be a failure, resulting in the phenomenon of 'ownerless corporations', as described by Lord Myners.

The book puts forward a model which explains the factors that determine institutional shareholders' propensity for activism. The model both elaborates the collective benefits of activism as a means of achieving managerial accountability asks whether and when shareholder activism is rational for any individual shareholder. The book then goes to on to apply these finding to both the UK and China in order to explain the varying levels of shareholder activism in each jurisdiction.

The book is the first to take an in-depth look at institutional share-holder activism in China providing prescriptions to promote greater shareholder engagement and exploring the potential it holds for improving corporate governance in the region.