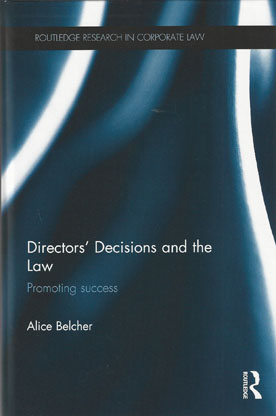 Directors are key decision-makers in any organisation whether it is in the public sector, a family business or a transnational company.

The UK Companies Act 2006 codified directors' duties for the first time with one of the duties listed as being 'would be most likely to promote the success of the company for the benefit of its members as a whole'. This book addresses key tensions and problems involved in director's duties and responsibilities in promoting success, including issues surrounding trust, risk and uncertainty, corporate culture and credibility, collective responsibility and the degree of control.

The book considers directors' decision making not only in the private sector but also in, and between, public sector organisations and it explicitly examines aspects of decision-making when organisations are in, or close to, financial distress. The book whilst mostly rooted in UK law draws on the company law in other jurisdiction including the USA, Germany and Australia.

The book makes use of an interdisciplinary approach, using management theory, economic theory and other areas such as behavioural studies to look at both what directors should do and they actually do. In doing so it addresses issues key to the understanding of corporate governance especially in light of the recent financial crisis.