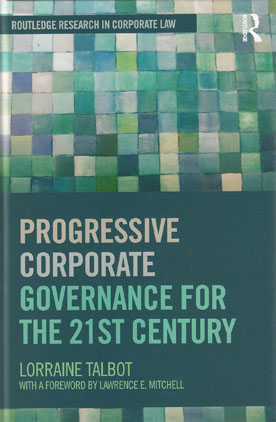 Progressive Comparative Corporate Governance is a wide ranging and ambitious study of why corporate governance is in the shape that it is, and how it can be improved.

She argues that the form of the Codes enables a neoliberal agenda to proliferate with negative social consequences. After illustrating how ex-command economies were earlier subjected to failed and destructive neoliberal proscriptions for transition she shows how neoliberalism has re-entered these economies through United Kingdom and OECD inspired corporate governance Codes.

The book concludes with suggestions for new approaches to corporate governance which would make the company work for the people, rather than the shareholder