Refugee Protection and the Role of Law: Conflicting Identities 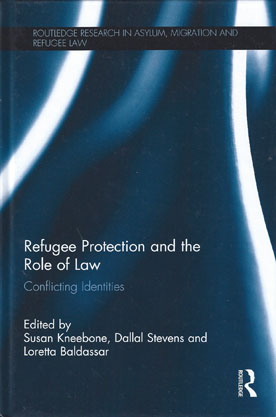 Sixty years on from the signing of the Refugee Convention, forced migration and refugee movements continue to raise global concerns for hosting states and regions, for countries of origin, for humanitarian organisations on the ground, and, of course, for the refugee.

This edited volume is framed around two themes which go to the core of contemporary 'refugeehood': protection and identity. It analyses how the issue of refugee identity is shaped by and responds to the legal regime of refugee protection in contemporary times. The book investigates the premise that there is a narrowing of protection space in many countries and many highly visible incidents of refoulement. It argues that 'Protection', which is a core focus of the Refugee Convention, appears to be under threat, as there are many gaps and inconsistencies in practice.

Contributors to the volume, who include Erika Feller, Elspeth Guild, Helene Lambert and Roger Zetter, look at the relevant issues from the perspective of a number of different disciplines including law, politics, sociology, and anthropology. The chapters examine the link between identity and protection as a basis for understanding how the Refugee Convention has been and is being applied in policy and practice. The situation in a number of jurisdictions and regions in Europe, North America, South East Asia, Africa and the Middle East is explored in order to ask the question does jurisprudence under the Refugee Convention need better coordination and how successful is oversight of the Convention?

Asylum-Seeker and Refugee Protection in Sub-Saharan Africa: The Peregrination of a Persecuted Human Being in Search of a Safe Haven
Cristiano d'Orsi
ISBN 9781138094253
Published April 2017
Routledge
£39.99

Asylum-Seeker and Refugee Protection in Sub-Saharan Africa: The Peregrination of a Persecuted Human Being in Search of a Safe Haven (eBook)
Cristiano d'Orsi
ISBN 9781317669814
Published August 2015
Routledge
£35.82