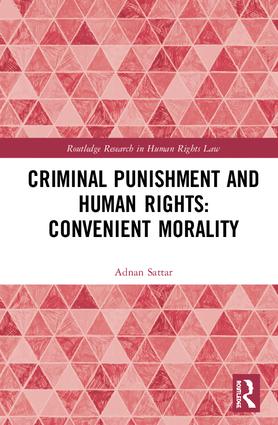 This book examines the relationship between international human rights discourse and the justifications for criminal punishment. Using inter-disciplinary discourse analysis, it exposes certain paradoxes that underpin the ‘International Bill of Human Rights’, academic commentaries on human rights law, and the global human rights monitoring regime in relation to the aims of punishment in domestic penal systems.

It argues that human rights discourse, owing to its theoretical kinship with Kantian philosophy, embodies a paradoxical commitment to human dignity on the one hand, and retributive punishment on the other. Further, it sustains the split between criminal justice and social justice, which results in a sociologically ill-informed understanding of punishment. Human rights discourse plays a paradoxical role vis-à-vis the punitive power of the State as it seeks to counter criminalisation in some areas and backs the introduction of new criminal offences – and longer prison sentences – in others. The underlying priorities, it is argued, have been shaped by a number of historical circumstances.

Drawing on archival material, the study demonstrates that the international penal discourse produced during the late nineteenth and early twentieth century laid greater emphasis on offender rehabilitation, and was more attentive to the social context of crime than is the case with the modern human rights discourse.

Contents:
Acknowledgements
Table of Conventions, Treaties and International Instruments
Table of National Legislation
Table of Cases
Introduction
1. The Crime of Punishment: Reassessing Classical Penal Theory
2. The Gods that Failed: Positivist Criminology and the Legacy of the International Penal and Penitentiary Commission
3. Retributivism in the Age of Human Rights
4. Punishment and the Origins of International Human Rights Law: An Uncensored Account
5. The Untold Story of the Howard League’s Campaign for an International Prisoners’ Convention
6. The Great Force of History: Development of the Global Human Rights Regime
7. The Evolution and Interpretation of Human Rights Norms and Penal Aims: A New Standard of Civilization?
Conclusion
Bibliography

The European Convention of Human Rights Regime: Reform of Immigration and Minority Policies from Afar
Dia Anagnostou
ISBN 9781032188300
To be published September 2022
Routledge
£120.00

Children's Lives in an Era of Children's Rights: The Progress of the Convention on the Rights of the Child in Africa (eBook)
Edited by: Afua Twum-Danso Imoh, Nicola Ansell
ISBN 9781135071776
Published January 2014
Routledge
£35.09