The EU as a ‘Global Player’ in Human Rights? 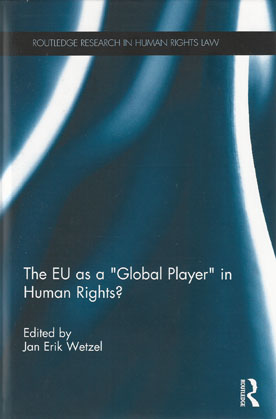 Human rights and the rule of law are regarded as cornerstones of the European Union, playing a key role in the internal order of the EU and with regard to accession.

Official publications promote this role internationally, and the legalistic approach of the EU has been contrasted with the projection of political and military power by the USA, Russia or China. But to what extent does this reflect reality when it comes to the protection of human rights on the global level?

Following on from the 2008 Kadi-decision by the European Court of Justice, which has been widely discussed as possibly creating a conflict between the UN and the EU, this book explores whether the EU’s human rights order has real and distinctive relevance on a global scale and whether it can be considered as a significant international human rights organisation.

Contents:
1. Introduction, Jan Erik Wetzel
Part 1: The Position of Human Rights Within the EU Framework
2. Assessing the EU's Position on Human Rights: Is it a Desireable One?, Richard Burchill
3. Monitoring and Enforcing Fundamental Rights: Can the European Union Measure Up Against Other Intrnational Organisations?, Rhona K.M. Smith
4. European Human Rights Law as a Multi-Layered Human Rights Regime: Preserving Diversity and Promoting Human Rights, Marton Varju
Part 2: EU Human Rights Policies in Internationl Institutions
5. Inconvenient Multilateralism: The Challenges of the EU as a Player in the United Nations Human Rights Council, Gjovalin Macaj and Joachim A. Koops
6. The EU Commitment to International Criminal Justice: Achievements and Possibilities?, Olympia Bekou and Marck Chadwick
7. Human Rights in Trade: The EU's Experience with Labour Standards Conditionality and its Role in Promoting Labour Standards in the WTO, Tamara Takacs
Part 3: The Influence of EU Human Rights Law Outside of Europe
8. Imperialistic Endeavour or Empty Rhetoric? Analysing the EU's Promotion of Human Rights in China Since 1989 through a 'Normative Power' Perspective, Wenwen Shen
9. Too Different to be Relevant? Considering the Global Influence of EU Asylum Laws and Policy wit Respect to Japan, Emiko Nakasaka
10. The Promotion and Protection of Human Rights during Common Security and Defence Policy Operations: In-Between a Spreading State of Mind and an Unsolved Concern, Maria Luisia Sanchez Barrueco
Part 4: EU Human Rights Law as a Regional International Standard
11. The EU Competition Policy as an International Human Rights Issue, Wolfgang Weiß
12. Double Jeopardy in Europe: What Lessons for Global Players?, Dawn Sedman
13. Defining the Free PressL Recent European Case-Law on Political Free Speech, Anti-Terrorism Legislation and the Free Press, Angus Nurse
14. EU Equality Law: From Protecting 'Groups' to Protection of All, Joanne Milner
15. Conclusion, Looking to the Future: No Hubris, No False Modesty, Geoffrey Harris

The European Convention of Human Rights Regime: Reform of Immigration and Minority Policies from Afar
Dia Anagnostou
ISBN 9781032188300
To be published September 2022
Routledge
£120.00

The Right to Equality in European Human Rights Law: The Quest for Substance in the Jurisprudence of the European Courts (eBook)
Charilaos Nikolaidis
ISBN 9781317701378
Published August 2014
Routledge
£32.49

Children's Lives in an Era of Children's Rights: The Progress of the Convention on the Rights of the Child in Africa (eBook)
Edited by: Afua Twum-Danso Imoh, Nicola Ansell
ISBN 9781135071776
Published January 2014
Routledge
£32.49