Children's Lives in an Era of Children's Rights: The Progress of the Convention on the Rights of the Child in Africa 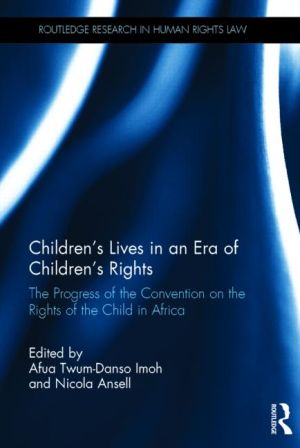 The Convention on the Rights of the Child (CRC), which was adopted unanimously by the United Nations General Assembly in 1989, is the world's most widely and most rapidly ratified international convention. The Convention was adopted partly in an attempt to set international norms and establish a universal standard for the concepts of childhood and child, promote a particular nature of childhood for children everywhere and to set a universal approach for protecting all children around the world. The Convention was different from its predecessors as it recognised children as autonomous individuals and holders of rights, as subjects rather than objects of international law. In this way, then, the Convention marked a turning point in the perception of children in international law and policy. Although it was hoped that the Convention would have a significant and positive impact on the lives of all children, which was one of the main guiding principles behind its creation, this has not happened in many parts of the world.

With specific regards to Africa, all countries have struggled to put in place the minimum standards to ensure children's rights and well being as a result of socio-economic factors, religion, culture, lack of political will, amongst others. This is particularly concerning for a continent where the proportion of the population under the age of 18 is the highest in the world. This book assesses the progress the Convention has made in the past two decades in ten different African countries as well as in the region more generally. It considers the implementation of the Convention both in terms of policy and practice and its impact on the lived experiences of children in societies across the continent, focusing on specific themes such as HIV/AIDS, education and disability, child labour, witchcraft stigmatisation, armed conflict and religion. The volume provides critical analysis of the progress of the Convention and identifies concrete ways forward for the better implementation of this treaty in the various social, cultural and political contexts that exist in Africa.

Contents:
1. Introduction, Afua Twum-Danso Imoh and Nicola Ansell
Part 1: Progress and Setbacks in the Implementation of the CRC: Country Overviews
2. Why are Aspirations for Children in Tanzania not translating into Substantive Change?, Kate McAlpine
3. Protection of the Rights of the Child in Nigeria: Progress and Setbacks, J. Shola Omotola
4. Assessing the Progress of the CRC in Ghana: a Critical Analysis of Legislative Measures since 1990, Robert Ame
Part 2: Implementing the CRC in the Era of the HIV/AIDS Pandemic
5. Malawi's Orphans - "Rights come Later", Andrea Freidus
6. Children's Rights in the Time of HIV/AIDS in KwaZulu-Natal, South Africa, Amy Norman
7. Africa at a Crossroads: Navigating between Rights - and Needs-based Approaches to Orphan Care, Kristen E. Cheney
Part 3: Child Labour and Children's Rights Principles
8. In the Best Interest of the Child: the Case of Child Domestic Workers in Ghana and Nigeria, Evelyn Omoike
9. Children's Rights to Work: Examining Rights-Based Programming and Interventions on Child Labour in Ethiopia, Tatek Abebe
10. The Monitoring Mechanisms of the Convention on the Rights of the Child: Effective Protection for the World's Most Vulnerable Children? A Case Study of the Talibe Children of Senegal, Lisa LeRoy
11. The CRC and Children in Armed Conflict: the African Context, Jenny Kuper
Part 4: Ensuring Basic Rights to Identity and Education
12. Accessing and Participating in Education in Lesotho: Children with Special Needs, Jacqui O'Riordan and James Urwick
Part 5: Children's Rights within the Context of Religious Belief Systems
13. Witchcraft Stigmatisation and Child Rights in Nigeria, Emilie Secker and Lynda Battarbee
14. Religion and Rights of Children: Notes from Nigeria, Shobana Shankar
15. The Convention on the Rights of the Child in Egypt: Between Modern and Islamic Perspectives, Federica Fedeli
16. Conclusion: Uses, Abuses and Neglect of the CRC: Toward an Agenda for Change, Nicola Ansell

Global Reflections on Children’s Rights and the Law: 30 Years After the Convention on the Rights of the Child
Edited by: Ellen Marrus, Pamela Laufer-Ukeles
ISBN 9780367673888
Published January 2023
Routledge
£36.99

Children's Lives in an Era of Children's Rights: The Progress of the Convention on the Rights of the Child in Africa (eBook)
Edited by: Afua Twum-Danso Imoh, Nicola Ansell
ISBN 9781135071776
Published January 2014
Routledge
£35.09