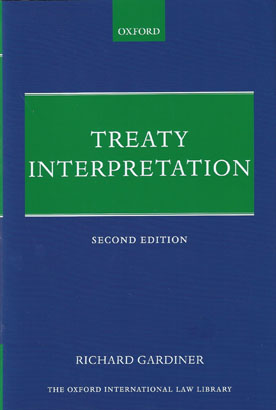 The rules of treaty interpretation codified in the 'Vienna Convention on the Law of Treaties' now apply to virtually all treaties, in an international context as well as within national legal systems, where treaties have an impact on a large and growing range of matters.

Any lawyer who ever has to consider international matters, and increasingly any lawyer whose work involves domestic legislation with any international connection, is at risk nowadays of encountering a treaty provision which requires interpretation, whether the treaty provision is explicitly in issue or is the source of the relevant domestic legislation.

This fully updated new edition features case law from a broader range of jurisdictions, and an account of the work of the International Law Commission in its relation to interpretative declarations. This book provides a guide to interpreting treaties properly in accordance with the modern rules.

Contents:
I. OVERVIEW, HISTORY, MATERIALS, AND INTERPRETERS
1. Introduction
2. History and Development of Rules of Interpretation
3. Making Treaties and Treaty Materials
4. Who Interprets Treaties?
II. INTERPRETATION APPLYING THE VIENNA CONVENTION ON THE LAW OF TREATIES
A. THE GENERAL RULE
5. Text, Context, and Ordinary Meaning of Words
6. Agreements on Meaning and Subsequent Practice
7. Relevant Rules of International Law and Special Meanings
B. SUPPLEMENTARY MEANS OF INTERPRETATION
8. Preparatory Work and Circumstances of Conclusion of Treaty
C. LANGUAGES
9. Text in Different Languages
III. CONCLUSION
10. Criticism, Themes, Issues, and Conclusions