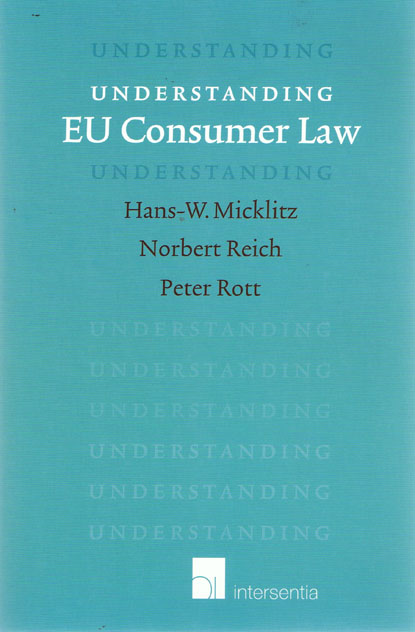 
EU consumer law is the core of European private law. In recent years, it has been subject to spectacular decisions by the European Court of Justice, with important consequences for the private law of Member States. Currently, it is under scrutiny by the EC Commission, which has just published a proposal for the revision of mportant aspects of the EU consumer law acquis.

The three authors have worked together to take a broad horizontal approach at the European consumer law acquis, thereby reflecting on the history, the achievements and also the shortcomings of EC law in this important field of law. The change from minimum to full or targeted harmonisation is critically analysed.

The book contains an overall description of the position of EU consumer law between internal market law and consumer protection in Chapter 1. The following chapters 2 to 5 deal with advertising and commercial practices law mostly under Directive 2005/29/EC, with Directive 93/13/EEC on unfair terms in consumer contracts, with consumer sales under Directive 1999/44/EC and with the recent Directive 2008/48/EC on credit agreements for consumers. Chapter 6 takes a fresh look at an old acquaintance, namely Directive 85/374/EEC on product liability, upgraded by an annex proposing an EC instrument introducing service liability. The closing chapters 7 and 8 concern cross-border consumer transactions, breaches of consumer law and litigation, and different mechanisms of individual and collective consumer protection to make consumer law effective and efficient.

This volume gives consumer law in the EU a new perspective. It is equally indispensible for scholars and practitioners. It also serves as a valuable guide in the debate about the Commission proposal of October 2008 for a Directive on consumer rights.