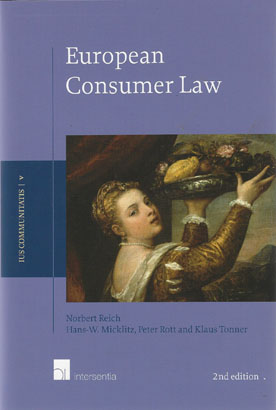 
EU consumer law is the core of European civil law. In recent years, in particular between the first edition of 2009 and this second edition, it has been subject to spectacular decisions by the Court of Justice of the European Union, with significant consequences for Member States’ law.

This revised and thoroughly updated new edition follows and analyses this process in such important areas as unfair commercial practices, unfair terms, cross-border consumer protection, and product liability. There has been legislation in the area of consumer rights in distance and off-premise contracts, and very recently consumer ADR and ODR.

Other projects are still in the pipeline, e.g. mortgage credit; another is subject to heated controversy, namely the proposed optional Common European Sales Law with an important part on consumer law. Even more importantly, the very concept of consumer and consumer protection has been subject to intense debate. Does EU law limit itself to the ‘informed consumer standard’, or should the ‘weaker’ or even the ‘vulnerable consumer standard’ be given more attention?

The original team of authors Hans W.-Micklitz, Norbert Reich and Peter Rott have been strengthened by the addition of Klaus Tonner. They have worked together to take a broad horizontal approach to the EU consumer law acquis, thereby reflecting on the history, achievements, recent trends and also shortcomings of EU law in this important field of law. The change from ‘minimum’ to ‘full’ or ‘targeted harmonisation’ is critically analysed, and the central role of the CJEU documented and emphasised.