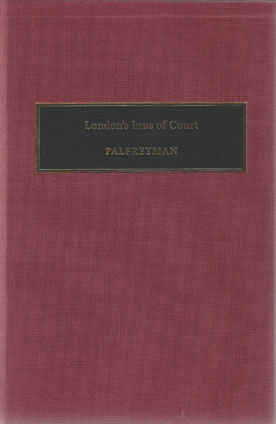 This is the first sizeable and comprehensive study of the Inns (history, legal status, finances, customs, and modern purpose) for over seventy years, since Blackham’s ‘Wig and Gown’ (1932).

As most, but not perhaps all, readers will know there are four Inns that make up London’s Inns of Court (Gray’s Inn, the Inner Temple, Lincoln’s Inn, and the Middle Temple). They probably date from the 1330s or 1340s, and possibly earlier: nobody knows for certain. There are some 25-30,000 members of the Inns: membership figures are not usually made public.

This book answers many of the questions (as detailed below) often asked about these Inns and considers the key issues surrounding their modern purpose in training a branch of the English legal profession as well as providing a work-place (and a social-networking space) for the bulk of the country’s legal experts occupying these historic complexes of buildings located in Holborn as London’s legal quarter.

Just what are the Inns of Court:-

Finally, we must try to decide whether, in short, they are 'a good thing' and still 'fit-for-purpose' at the start of the twenty-first century after almost 700 years of existence. Will they survive the implementation of the Legal Services Act 2007 that seeks to deregulate and liberalise the legal profession, and that aims to expose the supply of legal services to competition? Do they continue to have a vital purpose in being a crucial part of legal education and training, or do they risk being a loose amalgam of vague and even conflicting purposes?

The Lincoln’s Inn website describes the Inn as ‘a very multifarious organisation: a collegiate and educational institution, a membership organisation, a professional body, a landlord, a custodian of historic buildings, a banqueting venue and a tourist attraction’.

In the context of reforms of the legal profession playing out over the next decade can these Inns really retain, energetically sustain, and imaginatively enhance the crucial and sine qua non facet of those many functions, that being their role as educational institutions - without which they are a lobby group, a club, a supplier of office premises and posh catering facilities, a film set and a tourist target, but will lack the inner vitality that has seen them survive for almost 700 years as ‘the legal university’.