Current Issues in European Financial and Insolvency Law: Perspectives from France and the UK 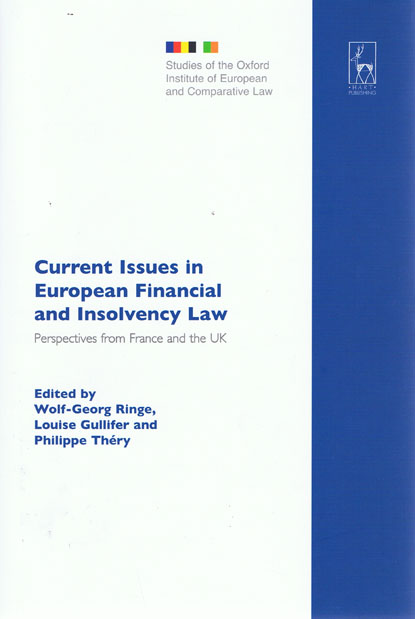 Recent case-law and legislation in European company and insolvency law have significantly furthered the integration of European business regulation. In particular, the case-law of the European Court of Justice and the introduction of the EU Insolvency Regulation have provided the stimulus for current reforms in various jurisdictions in the fields of insolvency and financial law.

The UK, for instance, has adopted the Enterprise Act in 2002, designed, inter alia, to enhance enterprise and to strengthen the UK’s approach to bankruptcy and corporate rescue. In a similar vein, a recent reform in France has modernised French insolvency law and even introduced a tool similar to the successful English ‘company voluntary arrangement’ (CVA).

This book provides a collection of studies by some of the leading English and French experts today, analysing current perspectives of insolvency and financial law in Europe, both on the national as well as on the European level.

Contents:
1. The Evolution of Insolvency Law in France
Philippe Théry
2. The Reforms of the Enterprise Act 2002 and the Floating Charge as a Security Device
Louise Gullifer
3. The Effect of the Enterprise Act 2002: Empirical Research into Corporate Insolvency
Sandra Frisby
4. Comment and Summary
Philippe Théry
5. Strategic Insolvency Migration and Community Law
Wolf-Georg Ringe
6. The ‘Centre of the Debtor’s Main Interests’: Comments on the Eurofood Judgment of the ECJ
Georges Khairallah
7. European Insolvency Proceedings and Party Choice: Comment
John Armour
8. The Recent Influence of Insolvency Law on the Evolution of Security in French Law
Pierre Crocq
9. Guarantees and Collective Procedures
Laurent Leveneur
10. Comments and Discussion Report
Hugh Beale
11. The Exclusion of Certain Creditors from the Law of Collective Proceedings
Hervé Synvet
12. How Do the Courts Choose between Different Bankruptcy Outcomes? The Results of a French Survey
Régis Blazy, Betrand Chopard, Agnès Fimayer and Jean-Daniel Guigou
13. Comments and Discussion Report
Robert Stevens
14. Summary
Wolf-Georg Ringe and Louise Gullifer