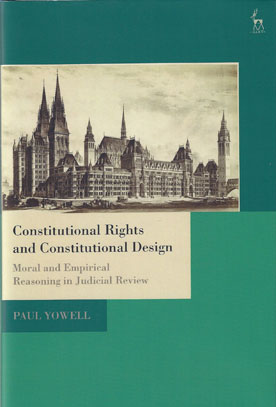 Constitutional courts around the world increasingly rely on empirical and moral reasoning in judicial review of legislation.

The abstract language of bills of rights and the proportionality inquiry invite the use of non-legal sources to resolve cases about constitutional rights, which address the most controversial issues of our day: data privacy, anti-terrorism laws, assisted suicide, marriage, abortion, and more. Judges review social science research to assess whether a law will effectively achieve its aim, and at what cost to other interests, citing studies and statistical information from psychology, sociology, and medicine, and other disciplines.

This empirical reasoning proceeds alongside moral reasoning regarding values such as equality, liberty, and autonomy, determining what they require in concrete circumstances.

This book shows that courts were not designed for this kind of moral and empirical reasoning, and generally lack the institutional capacities needed to do it well. The crux of the problem is the entrenched nature of constitutional decisions. A judgment that annuls legislation or establishes a new right is, in principle, permanent.

Moral and factual errors made by constitutional courts are not subject to the correcting mechanisms of ordinary political and legislative processes. The book concludes with practical proposals to address the deficit in the institutional capacities of courts, and to ameliorate the entrenchment effect of constitutional decisions.