Routledge Handbook of Law and Terrorism 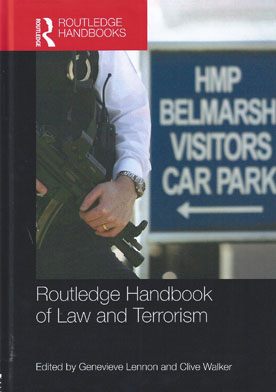 In the years since 9/11 counter-terrorism law and policy has proliferated across the world. This book sets out a comprehensive survey of how the law has been deployed in all aspects of counter-terrorism.

The handbook provides an authoritative and critical analysis of how laws are, and ought to be, invoked in domestic jurisdictions against terrorism. With a comparative approach the focus is on those jurisdictions which have produced legal innovations with a sizeable impact, primarily the USA, the UK, Australia, Canada, France, Germany and the European Union.

The never before published contributions to the book are written by experts in the field of terrorism law and policy, allowing for discussion of a wide range of regulatory responses and strategies of governance.

The book is divided into four parts: the boundaries and strategies of national counter-terrorism laws; the pursuit of terrorists through national criminal process and executive measures; protective security; and preventive measures.

The chapters engage with areas of traditional interest to lawyers such as policing and special powers, criminal offences and the courts, and prison regimes but also tackle emerging subjects including preventing radicalisation and protective/preparative security. In this way the handbook reflects the elements of counter-terrorism laws which are more transformative of mass movements and transactions alongside prosecutions or orders aimed at particular individuals.

Routledge Handbook of International Law and the Humanities
Edited by: Shane Chalmers, Sundhya Pahuja
ISBN 9780367773458
To be published January 2023
Routledge
£39.99